What Is Economic Cost?

When describing the cost of a course of action as an alternative, the concept becomes even more theoretical. This is because the number of options goes as far as the imagination can go. However, economic cost is still an important aspect of practical economics. It is one of the basic concepts in economics and applied constantly, even when you are not reflective of the opportunity costs involved.

Take a look at the following examples. Each one is an example of economic cost, but at different scale levels.

Economic Cost at a Personal Level

There is also the economic cost of time. Cycling to work will take the longest, but there is no risk of getting stuck in traffic en route to the office. Driving the car to work is potentially the fastest option, but traffic is unpredictable. The travel time by bus is only four minutes longer than by car, because the bus is allowed to drive in the express lane. However, taking the bus requires a 5-minute walk to the nearest bus stop from your house, and another 3 minutes from the bus stop to the office.

The difference in travel time for each option is only a few minutes. However, those few minutes can also be spent on other routines—like drinking a cup of coffee, watching the news, or snoozing for a few more minutes. The economic cost of each travel option is a balance of price difference, time spent on travelling to work, and time that could be spent doing something else.

A t-shirt printing business uses two methods to print on the t-shirts. Once involves attaching a cloth sticker, while the other involves embroidering the text or image. The business wants to increase production of one of the methods. This means either hiring more staff that can work the sewing machines, or purchasing a machine that can attach the cloth stickers at a faster pace. The difference in the required budget for each option is inconsequential. However, the current budget does not allow for investment in both production methods. The economic cost of either choice is the cost of foregoing the other option.

Below is a graphic example of macroeconomic economic cost. It was put together by the World Bank to illustrate the economic cost of conflict. 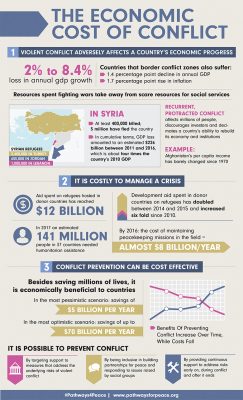